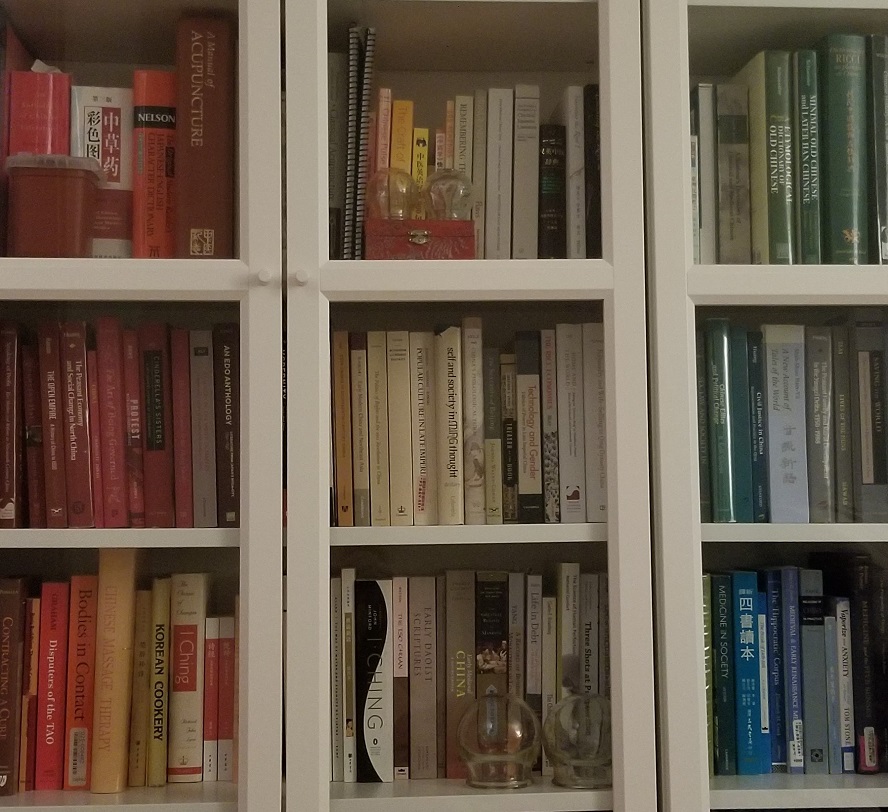 Recipes for Self-Healing, and Helping Ourselves, by Daverick Leggett. The first contains 100 pages of easily digestible basic theory of traditional East Asian medicine, and how to apply theory to diet. This is a great first resource for laypeople interested in this topic.

Chinese Nutrition Therapy, by Jeorg Kastner, M.D., L.Ac. A splendid resource whose only drawback is the steep price point.

In Defense of Food: An Eater’s Manifesto, by Michael Pollan; also available as a TV series from PBS. A great handbook for healthy eating in an increasingly complex, even deceptive, modern mass-produced, convenience-marketed, food system.

Prescription for Nutritional Healing, 5th ed., by Phylis Balch, CNC. My go-to reference for information on vitamins, herbal supplements, and food remedies from a biomedical perspective. Alphabetically organized by condition, with a cross-index of individual substances.

The Analects, translated by Annping Chin. The Analects is a collection of the sayings of Confucius, who became the most important thinker of Chinese antiquity, as recorded by his various students following his death; much like the Christian bible, each chapter thus bears the name of a disciple as a title. It covers topics as diverse as statecraft, personal virtue, and the importance of learning poetry – and reading the entire text will demonstrate how they are all related.

Taoteching [The Way and Its Virtue], translated by Red Pine. Confucius lived during a time called the Warring States period (475 -221 BCE). In Chinese intellectual history this has sometimes been referred to as the era of the “hundred schools of thought,” where a variety of philosophies/philosophers were competing for political dominance, marketing themselves to a shrinking number of rulers. Although the enigmatic poetics of the Taoteching (Dao de jing, in pinyin) were much admired by proponents of the New Age movement of the 1960s/70s, it bears underscoring that it was written during the Warring States period, and the text in many places clearly addresses a head of state, rather than individuals concerned with personal longevity.

Zhuangzi, translated by Burton Watson. The Zhuangzi, named after its purported author, follows in the Daoist tradition of the Dao de jing, but with much less emphasis on politics, and much more on living one’s life as a private citizen to the fullest – convention be damned. Full of delightful anecdotes, stories, and parables (some even, supposedly, about Confucius himself) the Zhuangzi is a text that delights in turning expectations on their head, and never takes itself too seriously. A true G.O.A.T. read.

The Web That Has No Weaver, Ted Kaptchuk. A clearly written introduction to many of the fundamental concepts of Chinese Medicine by a giant in the field. Kaptchuk was one of the first generations of westerners educated in CM, and is a professor and researcher at Harvard Medical School.

Fundamentals of Chinese Medicine, [A translation of the Zhong Yi Xue Ji Chu, a foundational TCM textbook used in contemporary China] Nigel Wiseman and Andrew Ellis, Paradigm Publications, 1996. If you’re looking for an introduction to Chinese Medicine sourced from a Chinese textbook, this is a great starting point.

Survey of Traditional Chinese Medicine, Claude Larre, Jean Schatz and Elisabeth Rochat de la Vallee, translated from French by Sarah Stang. Tai Sophia Press, 1986. This is one of my favorite introductory theory textbooks because the authors are intensely familiar with the medical classics. Through Rochat’s Monkey Press they also have available smaller/more easily digestible books on standalone topics, such as qi, the five phases [wu xing], yin and yang.

Recommendation categories I will add in the future: