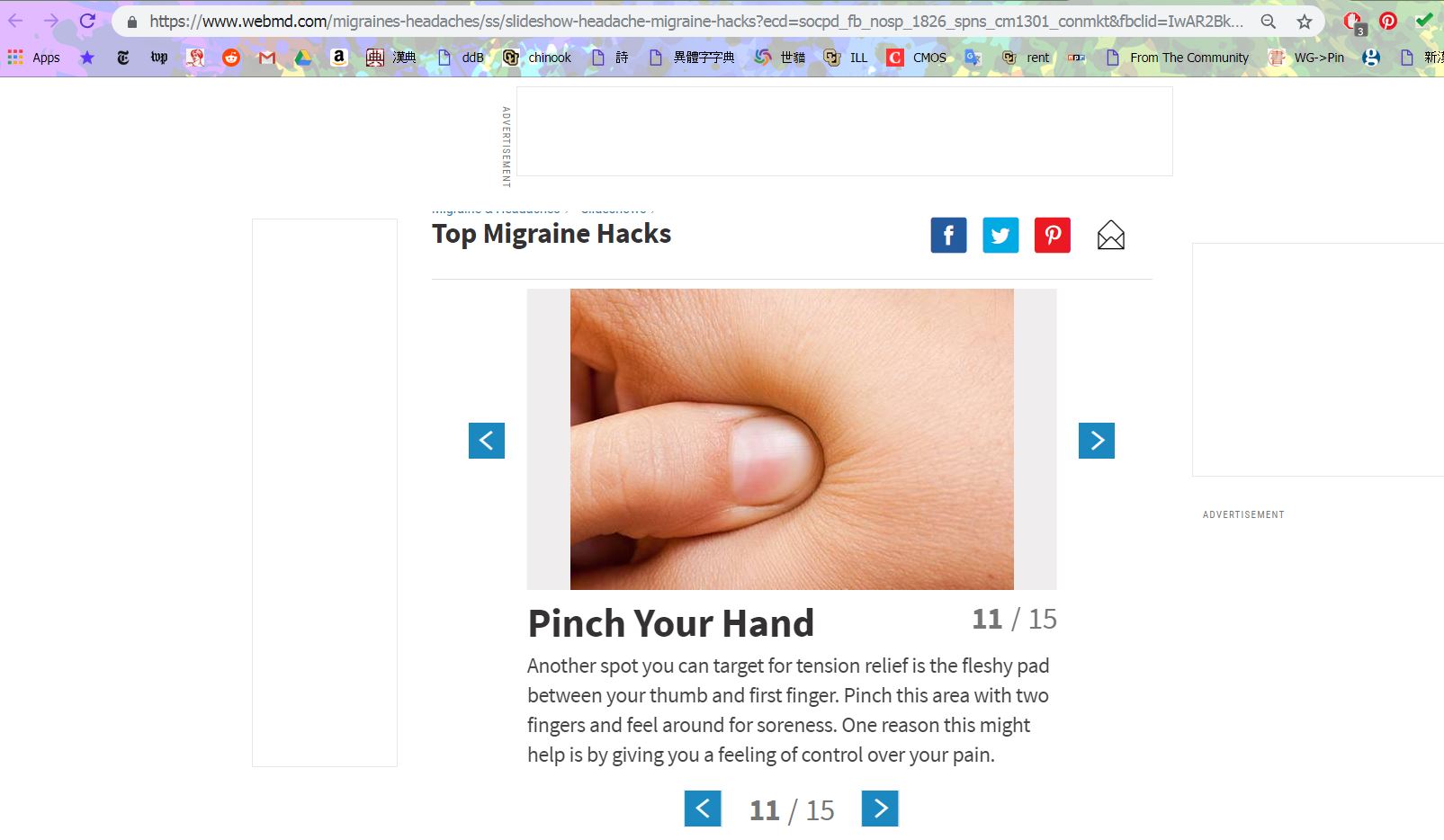 While browsing the internet today I was served an ad for WebMD entitled “Top Migraine Hacks.” Despite hating ads on principle (especially when they get through the adblocker I have installed), being disgusted that the internet somehow knows I suffer from migraines, and annoyed by the lame click-bait title, for the sake of knowing what bio-medicine bloggers consider a “migraine hack” I clicked through.

Most of their “hacks” (I do not think this slang means what you think it means, Web MD) were fair: wear sunglasses, don’t stare at sources of blue light, keep a regular daily sleep and meal schedule – these are all things any migraine sufferer should know, things that I’ve explained to patients numerous times. But one remedy in particular really ground my gears. I screen-capped it for your viewing dis-pleasure here:

Allow me to retype that caption, in case it was too small for you to mock along with me. If you already read it, feel free to re-read it with me, using your smarmiest up-talking voice: “Another spot you can target for tension relief is the fleshy pad between your thumb and first finger. Pinch this area with two fingers and feel around for soreness. One reason this might help is by giving you a feel of control over your pain.”

Oh, the problems here. Where oh where do I begin?

First, recommending a proven pressure point without crediting the source (Traditional East Asian Medicines) is straight-up cultural appropriation. This place has a name. It’s name is hegu 合谷, which means something like “joining the valley.” In the West it is better known by its WHO classification, Li-4. Repeat with me: “Its name is hegu. It’s also known as Li-4. It’s a commonly known and used acupoint in Traditional East Asian medical therapies.”

Second, they’re presenting an acupoint stripped of context, and so when they describe the rationale for its use they must resort to psychosomatic effect: “One reason this might help is by giving you a feeling of control over your pain.” Because obviously its pain-relieving impact must be illusory – a product of your mind, of taking control – rather than an actual analgesic effect. Biomed bitches, please @_@ Since I know you’re too culturally imperialist to care about what, oh, thousands of East Asian references say about this point, maybe you’ll care about modern research studies. Do a simple Pubmed search for “acupuncture analgesia” and nearly every study done cites Li-4 as point used. Why? Because it’s a well-known pain control point.

More specifically, however, hegu/Li-4 is known for its property of reducing head pain, because the channel-pathway it falls on connects with the face. So it’s actually best for toothache and nose problems, and may or may not work for migraines, depending on the type of migraine you’re suffering from.

This brings me to my third point, that not all migraines are felt the same or stem from the same source. Even biomedicine differentiates classical from common from hormonal from cyclical migraines. In TEAM, we even differentiate further: a hormonal migraine occurring before or after menstruation, for instance, is likely to have very different causes. Obviously these “migraine hacks” aren’t in the sophistication business, but the root cause matters in determining why some remedies will work in some patients, sometimes, and not in other patients, or at other times.